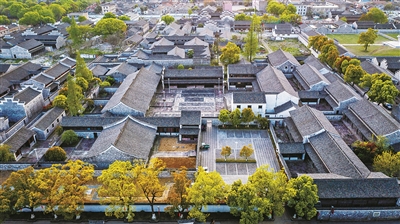 Cicheng, a millennium town in Ningbo, is a famous tourist attraction. Originally planned and built during the Tang Dynasty (AD 618-907), Cicheng's style took after the once capital city Chang'an. 33 buildings in the town have been protected at national or district level status.

Cicheng, literally "Town of Filial Piety" in Chinese, derives its name from a moving folk tale.

During the Han Dynasty (206 BC- 220 AD), on the north bank of Cihu Lake lived a man named Dong An. His mother fell incurably ill and expressed her last wish on her deathbed: to drink the water from her hometown one last time.

As an obedient son, Dong trekked dozens of miles every day to a stream in his mother's hometown to fetch water. After several days, his mother miraculously recovered. In honor of the dutiful son, the local governor named the town Cicheng.

This ancient town has given birth to many great scholars, including 519 jinshi (successful candidates of the highest imperial examinations in ancient China). World-renowned geneticist Tan Jiazhen and famous Chinese writer Feng Jicai are both Cicheng locals.